Patchwork have been around longer than I have been breeding. But the gene was lost for a short time and resurfaced. There are not many of them anymore so they are considered rare. One of the rarest varieties in fact.
Patchwork is a recessive gene. Which is not related to any other genes in rats. They are a unique variety all to themselves. This variety constantly molts it hair into new unique patterns. Much like a Rorschach pattern that's ever changing. There is no other rat that looks like them, and it's very striking and eye catching.
A lot of breeders won't talk about the actual issues with the rats, in public. But they are not easy to breed for. The current lines in the world are slowly getting healthier, but they are not free from issues. They have problems birthing, carrying litters, and develop eye issues such as infections, losing eyes to infections before weaning. Some die before they even wean. And this can be linked to immune system issues as they have a hard time fighting off the infections. If a breeder can raise them past weaning, things seem to go well after that. However saying that, many breeders are not bringing in new blood into the lines and are constantly inbreeding and line breeding. Which normally is a good thing. But when you have serious issues in a line this does nothing to get rid of the issues. Instead it just keeps the issues in the line and cements it as an issue for future generations. Patchwork rats need new blood being brought in all the time and a good outcrossing to get rid of the issues. Some breeders are doing this and seeing great results. These are the issues PW have been facing for years, and the reason people stopped breeding them and the gene was lost there for about a year and a half to 2 years. Breeders got frustrated with it and moved onto other types of rats to breed. When it resurfaced they were inbred again and the problems got worse than when we previously had them in more abundance. So some lines are not as far along as others. Some breeders are being very responsible and breeding new healthier blood into the lines.


It's fun to see what the responsible breeders are doing with them. You can now see them in a variety of fun colors as new genes are bred in. I've seen a few types like pink eyed Marten & Albino, Agouti and Black. I will be posting updated pictures here every so often to show individuals that I have in my breeding program.
Posted by Camarattery at 8:14 PM No comments: 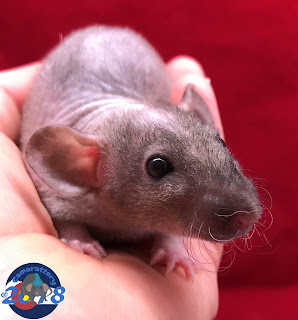 I have babies available in the nursery right now. If you are interested in adopting here is my nursery link.
Posted by Camarattery at 8:40 AM No comments:

I am a serious rat breeder. I breed for quality not quantity. And I specialize in pedigreed rats bred for health and longevity.